Office of the Mayor

“Don’t you just love this city,” is not only Mayor Lioneld Jordan’s signature phrase, it is how he truly feels about Fayetteville. Mayor Jordan brings his passion for public service to the community day after day, improving quality of life and frequently talking about what makes Fayetteville unique and great. He is known for his “open door, open mind, open heart” philosophy, and he applies his core principals of equality, diversity and inclusion through every action.

Mayor Lioneld Jordan has held public office in Fayetteville for more than 20 years. He was elected to the City Council in 2000 and re-elected in 2004. In 2008, he ran for Mayor and won in a run-off election. He was then re-elected as Mayor in 2012, 2016 and 2020. Lioneld was a career employee of the University of Arkansas before being elected as a City Council member in 2000.

Mayor Jordan continues to direct 10 master plans that were created during his last four-year term. The plans take many months and include dozens of public engagement events, numerous surveys and hundreds of hours of staff time. The recently completed plans include:

These plans are used to help guide future growth with a focus on economic vitality interests, improving infrastructure and maintaining Fayetteville’s high quality of life.

Under Lioneld’s leadership, the City brought forward 10 bond issues designed help improve infrastructure, public safety, quality of life and economic vitality throughout Fayetteville. He led many months of city-wide public engagement and input sessions to educate residents on the short and long-term benefits of this work and incorporate their thoughts and ideas. In April 2019, Fayetteville voters approved preserving a one penny sales tax, enabling the City to invest up to $226 million in our community to fund crucial improvements to roads, trails, parks, public safety, job creation and construction of a new Cultural Arts Corridor that will help bring new life to the heart of the city. These bond projects are not just important to the safety, vitality, prosperity and quality of life in Fayetteville for the future – they are also helping keep the local economy strong during an unprecedented global pandemic. Mayor Jordan’s work to pass these bond projects, as well as to keep each individual project moving forward on time and on budget, is among his most impactful contributions to the City of Fayetteville during his time in office.

Mayor Jordan and his wife Diana have married for more than 40 years and have four children, seven grandchildren, and two rescue dogs. They have lived in the same house in south Fayetteville since 1977.

Duties - Office of the Mayor

The Mayor operates within State statutes and City Ordinances to provide community leadership. The Mayor accomplishes this task by providing and maintaining an open door forum for residents, business interests, and other interested parties to discuss City policy, concerns, and requests.

The Mayor is responsible for submitting an annual budget to City Council appropriating funds for government operations. The Office of the Mayor must create a balance of City services, recognizing the changing needs of the community and the desires of the citizens while maintaining financial stability. The Mayor is elected during the presidential election for a 4-year term and can serve an unlimited number of terms. 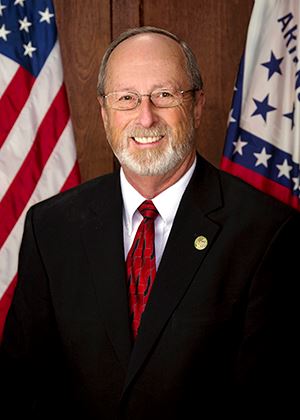