What is Small Cell?

Generally speaking, small cells are short range cellular towers that can be placed on structures such as streetlights, the sides of buildings, or poles. They look completely different than traditional cellular towers that are currently in use by the major mobile phone carriers. We are used to what are called macro cells—tall cellular towers you see along highways and on city rooftops. Small cells are designed to improve cellular service by installing groups of small cell devices to densify cellular antennas to increase network capacity.  A sample of a typical small-cell installation is seen here.

The Federal Communications Commission (FCC) defines  “small cells” as low-powered wireless base stations that function like cells in a mobile wireless network, typically covering targeted indoor or localized outdoor areas. With a limited supply of space for traditional cell towers, attaching small cell wireless facilities to street poles on city streets and in the right-of-way has become the new wave of bringing more accessible broadband to constituents. Since these small cells are collocated to poles on the ground level, there is less interference to network signals, allowing for higher capacity. However, a larger number of small cells are needed, as they emit lower power than other wireless solutions.

You may have heard the term "5G" when the term "small cell" is discussed. 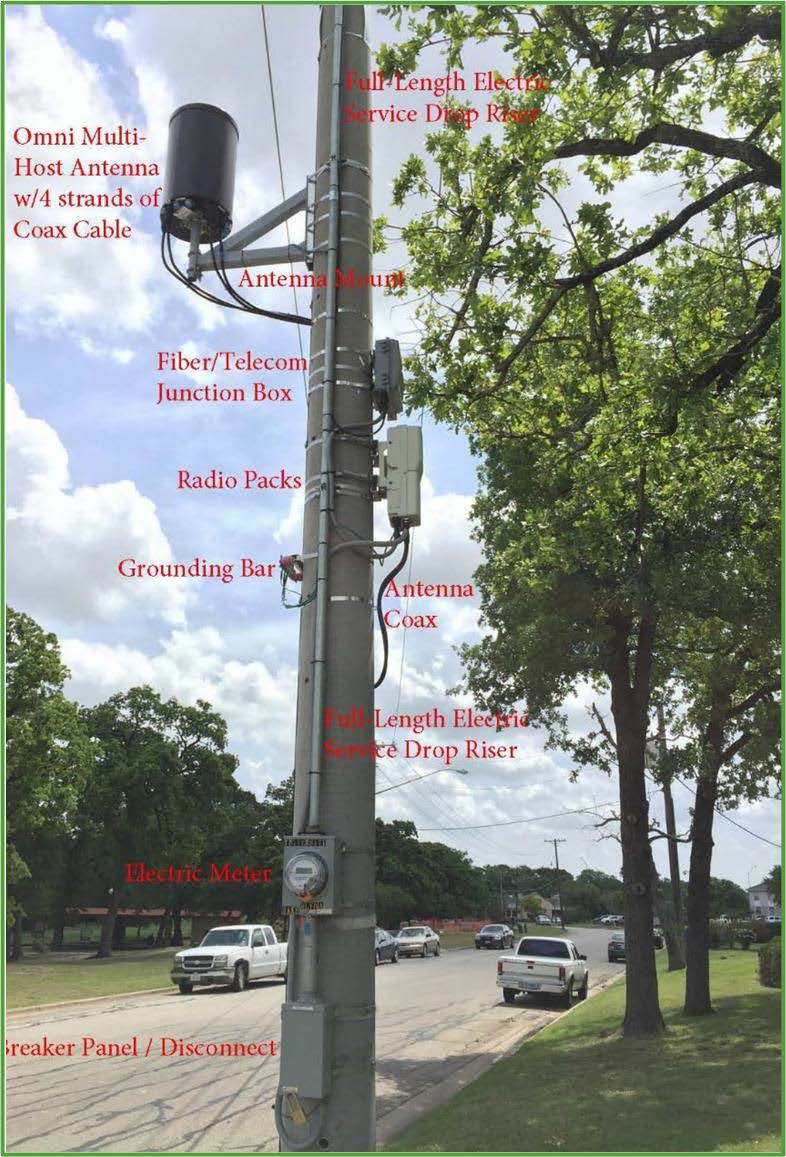 About the City of Fayetteville’s Ordinance

The City of Fayetteville felt it was important to get out ahead of this issue and devise a set of regulations to guide the rollout of 4G and future 5G small cell deployments on terms that would be acceptable to our residents.

On November 21, 2017, the City enacted an ordinance to provide for the permitting of these 5G structures in accordance with FCC rules and with guidance from the National League of Cities, which has developed a guide to cities to plan for small-cell wireless installation.

In developing the City’s ordinance, an internal team made up of Administration, Development Services, Information Technology staff, and the City Attorney’s office spent several months reviewing similar ordinances and statutes from a number of cities and states across the region, looking for what would be the best fit for Fayetteville. The team also met with five small-cell providers who reviewed draft language for the ordinance.

The ordinance addresses four primary issues to be considered as we implement this new technology in our city:

The ordinance also addresses some issues with respect to the types of technologies that may be implemented, including but not limited to:

This map depicts small cell locations that have been permitted by the City since the ordinance went into effect.  The City will work with providers to determine the status of installation as they are deployed and update the map accordingly.

Small cell providers should contact the City’s Planning Department to discuss the permitting process, which can be viewed here.

There was considerable public input when the ordinance was reviewed by city council over three separate readings and multiple revisions in fall, 2017. The issue also had wide coverage in the news at the time. Our final ordinance is recognized as a model small-cell agreement by Next Century Cities.

View the introductory presentation to the City Council here.

About the FCC’s September 27 ruling

On September 27, 2018, the Federal Communications Commission’s (FCC) adopted Order FCC 18-133 regarding Accelerating Wireless Broadband Deployment by Removing Barriers to Infrastructure Investment. In short, the FCC Order is an effort by the FCC to strengthen the hand of carriers in negotiations with local governments over small-cell deployment and to limit the ability of local governments to negotiate in the public interest around small cells.

While the FCC’s ruling limits the authority of local government to regulate the terms of 5G rollout, municipalities still have the ability to enact reasonable regulations governing small-cell deployments and negotiate agreements that benefit carriers while addressing citizens' concerns.